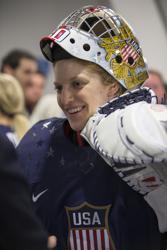 Schaus enjoyed a nine-year career with USA Hockey and earned a pair of silver medals as a member of the U.S. Women's Olympic Ice Hockey Team in 2010 in Vancouver, British Columbia and 2014 in Sochi, Russia.

"Molly has been an extremely dedicated and determined player for our Women's National Team Program since 2007 and will always be recognized for her effort and integrity,” said Reagan Carey, director of women’s hockey for USA Hockey. “She was a tremendous teammate who always represented the United States with dignity and class. Her contributions on and off the ice will be missed."

"I'd like to thank USA Hockey and all of the coaches and staff who played such a major role in my development, both on and off the ice," said Schaus. "Thank you to my family and friends and to everyone who supported me throughout this incredible journey. Most importantly, thank you to my teammates for making the last nine years, day in and day out, truly amazing. I am incredibly proud to have been part of this program and will take with me a lifetime of memories and friendships."

After her college career, she embarked on a two-year professional playing career in the Canadian Women’s Hockey League with the Boston Blades (2011-13). She was named Goalie of the Year her first season (2011-12) and won the Clarkson Cup in 2013. 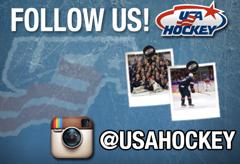 Team USA will suit up for the for the gold-medal game tomorrow night at 7:30 p.m. MST against the winner of tonight's Canada vs. Sweden semifinal contest.

Six players tallied in the U.S. victory, while 12 contributed to the scoring. Team USA scored twice in the first and third periods and posted four second-frame goals for the 8-0 score, while out shooting the Czechs 49-11.

"I'm really pleased with the way we played tonight," said Katey Stone, head coach for Team USA and also the head women's ice hockey coach at Harvard University. "We've really gotten better as the week went on and we're playing the kind of hockey we want to be playing going into the championship game. We had balanced offense tonight, with our four lines scoring two goals apiece. We made smart plays and put a lot of pressure on the Czechs. We look forward to the challenge of tomorrow's game."

Team USA gained a 2-0 lead in the first half of the opening frame. Bacon put the Americans on the board first when she tapped in a rebound during a scramble in front of Czech netminder Katerina Becevova at 2:28. Corey Stearns (Falmouth, Mass.) andElizabeth Turgeon (Cherry Hills Village, Colo.) earned assists on the play.

Captain Sarah Erickson (LaPorte, Minn.) potted her fifth goal of the tournament at the 7:19 mark during a U.S. power play, as she roofed Amanda Kessel's (Madison, Wis.) rebound at the goalmouth for a 2-0 score that held through the remainder of the frame.

The Americans turned it up a notch in the second period and lit the lamp four times to extend their lead to 6-0. Bacon scored for the second time in the game at 2:13, putting one high from the left post as Becevova went down. Madison Packer (Birmingham, Mich.) was next to tally for Team USA, as she put a wrist shot high stick side off a feed from Ashley Cottrell (Sterling Heights, Mich.) at 4:46.

Just 28 seconds after the Czech's Pavlina Horalkova was whistled for cross-checking, Kessel and Erickson combined for U.S. power-play goal No. 2 of the night at 5:52 for a 5-0 score. Ammerman closed out second-period scoring at 11:39 after stealing the puck from a Czech player at the left sideboards in the U.S. zone, walking it in, winding up and hitting the top of the far corner.

The final stanza saw another pair of U.S. tallies, first from Ammerman at 10:23 when she took a pass from Meagan Mangene (Manorville, N.Y.) and flipped it into the net from the right faceoff circle. Cottrell was last to score after Packer carried the puck into the Czech zone and sent it across to Cottrell, who put it in the open left side of the net at 12:10.

Alyssa Grogan (Eagan, Minn.) and Rebecca Ruegsegger (Lakewood, Colo.) combined for the shutout in net for Team USA with a total of 11 saves.