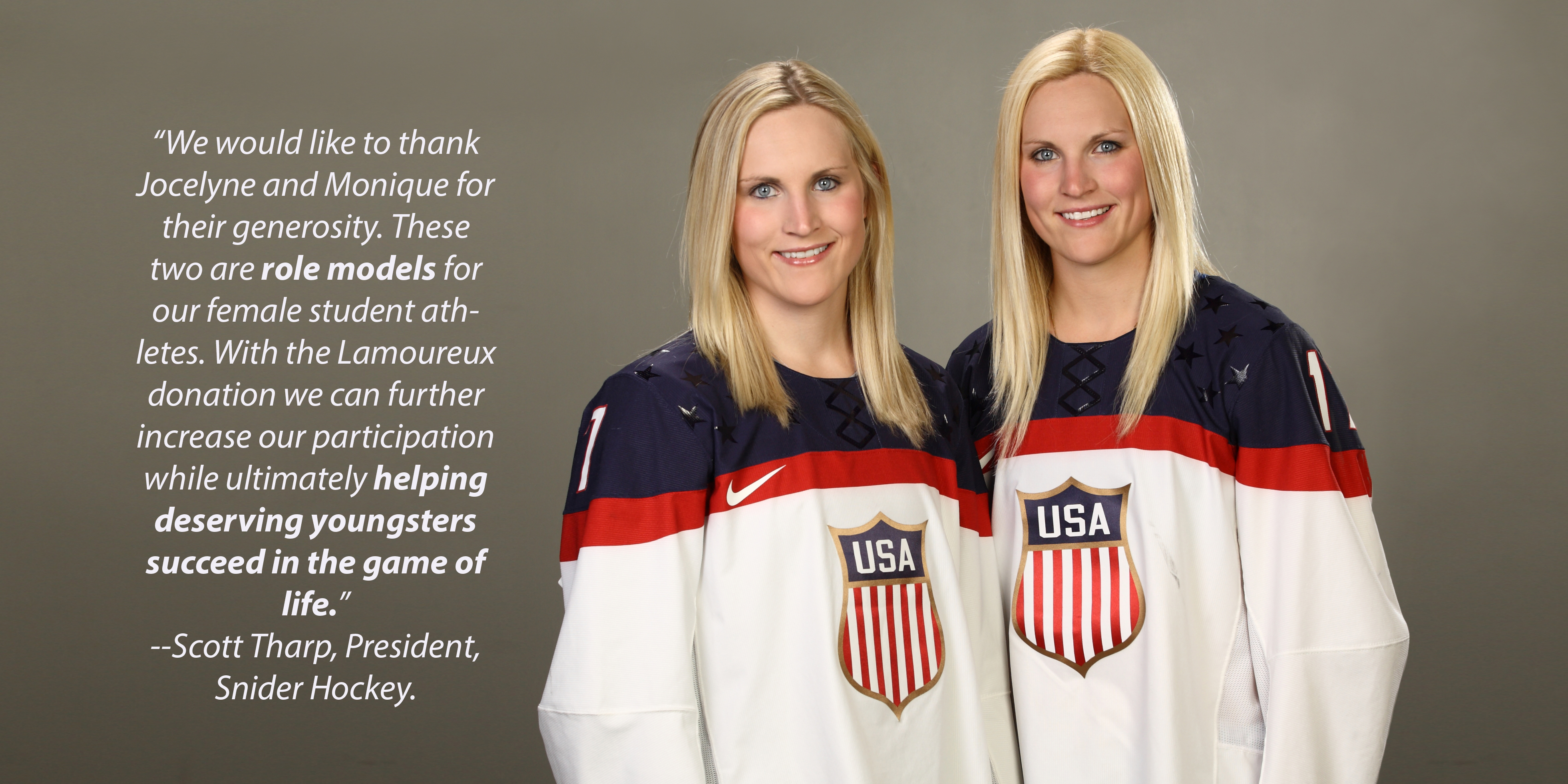 Jocelyne and Monique Lamoureux, members of the U.S. Women’s National Hockey Team, recently donated $5,000 in CCM hockey equipment to the Ed Snider Youth Hockey Foundation to support the program’s on-going Girls Hockey Programming and the National Hockey League’s Hockey is for Everyone (HIFE) initiatives. The donation corresponded with the NHL/Willie O’Ree Skills Weekend, which was hosted in Philadelphia by the Ed Snider Youth Hockey Foundation from  March 4-6.

The Lamoureux twins were student athletes at the University of North Dakota when Philadelphia Flyers coach Dave Hakstol was coach of the Men’s Hockey Team at UND.  The Twins in their career have won four World Championships and two Olympic Silver medals for Team USA and will play in the 2016 IIHF Women’s World Hockey Championship later this month in Kamloops, BC, Canada.

“We would like to thank Jocelyne and Monique for their generosity,” said Scott Tharp, President, Snider Hockey. “These two are role models for our female student athletes. With the Lamoureux donation we can further increase our participation while ultimately helping deserving youngsters succeed in the game of life.”

This season more than 250 young women participated in Snider Hockey girls only programs.

“We are thrilled to have team members like Monique and Jocelyne who are committed to growing the game and creating opportunities for all to play” said Sean Williams, VP Global Marketing and North American Sales, CCM Hockey.  “Their donation demonstrates their generosity and passion for the game.”

“Monique and I are excited to partner up with CCM and donate to the Snider Hockey Foundation.  At home in North Dakota, through our Lamoureux Hockey LLC we have made it our mission to grow the game and expose young boys and girls to the sport who may not have otherwise tried it.  We know that our friend Dave Hakstol shares this vision and we are happy to help grow the game with him in Philadelphia to make a difference through the sport for the youth in that community” said Jocelyne Lamoureux.

The Ed Snider Youth Hockey Foundation was created by Philadelphia Flyers Chairman Ed Snider in 2005 as his personal commitment to use his favorite sport to invest in the inner city and create opportunity for under-served Philadelphia youth.

The Ed Snider Youth Hockey Foundation was created by Philadelphia Flyers Chairman Ed Snider as his personal commitment to teach children important life lessons. Using the sport of hockey, the mission of Snider Hockey is to build lives and unite communities, helping educate young people to succeed in the game of life. Snider Hockey programs are provided at no cost and are focused on under-served boys and girls who otherwise would not have the opportunity to play, with an emphasis on character development, life skills, fitness, nutrition, and academics.